Global Geopark is a natural area with clear geographical-administrative boundaries, containing a collection of world-class geological and landscape heritages with the values of science, education, and sustainability development, along with other values of biodiversity, archeology, history, culture, and society. It has a large area to develop the local economy through the tourism development and other added services recognized by UNESCO.

To introduce the unique values and beauty of the UNESCO Global Geoparks in Vietnam, the Ministry of Information and Communications issues the stamp set “Global Geopark” including 03 stamps and 01 block with a price of 4,000 VND, 4,000 VND, 8,000 VND and 15,000 VND.

Model 3-1 introduces “Dong Van Karst Plateau UNESCO Global Geopark”: recognized by UNESCO on October 3, 2010, which is located at the northernmost mountainous region of Vietnam, with an area of 2,356.8 km² and the average altitude is about 1,400 – 1,600 (m). The plateau has many areas of steep slope limestone mountains located close to the Tropic of Cancer. The valleys, rivers, and streams in this area are sharply divided. It represents the history of the development of the earth’s crust, natural phenomena, unique aesthetic landscapes, high biodiversity, and long-standing cultural traditions of indigenous communities.

Model 3-2 introduces “Non Nuoc Cao Bang UNESCO Global Geopark”: recognized by UNESCO on April 12, 2018, covering more than 3,275 square kilometers located in the frontier area of Vietnam named Cao Bang, including areas of Ha Quang, Tra Linh, Quang Uyen, Trung Khanh, Ha Lang, and Phuc Hoa districts and part of Hoa An, Nguyen Binh and Thach An districts. It is home for more than 250,000 people belonging to 9 ethnic groups of Vietnam such as Tay, Nung, H’Mong, Kinh, Dao, and San Chay. In addition, it is also the rich cultural and historical land with more than 215 ranked cultural and historical relics, including 3 National Monuments, especially Tran Hung Dao Forest, Pac Bo historic site and the historic site of Border Victory in 1950. It is considered one of the areas in Vietnam occupied by prehistoric people since the early and is also the ancient capital of several feudal dynasties, and especially is the cradle of the Vietnamese Revolution during the French war.

Model 3-3 introduces “Dak Nong UNESCO Global Geopark”: recognized by UNESCO on 7/7/2020. The geopark covers an area of 4,760 km² with 5 districts: Krong No, Cu Jut, Dak Mil, Dak Song, Dak Glong and Gia Nghia city in Dak Nong province. With about 65 geological and geomorphological heritage sites, including a ecosystem of nearly 50 caves with a total length of more than 10,000 meters, craters, waterfalls… Dak Nong Geopark is popular as a rich red land with a tropical forest ecosystem preserving typical values of biodiversity and many unique cultural, geological, and natural features as well as vestiges of activities of the prehistoric man. Lava from volcanic eruptions has covered half of this land, forming a rich and fertile red basalt land. In 10,000 years ago, volcanoes were still active in this area, creating the most unique and massive volcanic cave system in Southeast Asia. Especially, traces of prehistoric man’s habitation dating back tens of thousands of years have been found in these caves.

The image has been provided by a group of authors Ngo Huy Hoa, Nguyen Son Tung, and Tran An and allowed to be used on postage stamps through the Management Board of UNESCO Global Geoparks in Vietnam. 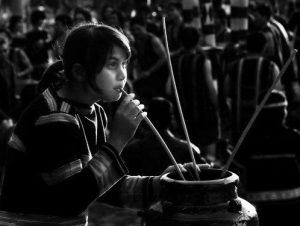 Columnar basalt – A perfect masterpiece of the Creator